After the recent demonetization move, there has been a lot of confusion among home buyers – and understandably so. As a result, buying decisions have been kept on hold until further clarity emerges.

One thing most experts agree upon is that demonetization will see price corrections in the secondary(resale) markets, because these markets have traditionally seen high levels of cash transactions.

However, primary real estate– i.e. fresh inventory (new flats) sold to buyers directly by a developer–will remain largely unaffected. This is because most buyers who invest in primary real estate projects take the home loan route, where all transactions are carried out through legal (banking) channels.

Below are 7 ways in which demonetization will impact the primary real estate market in India.

In the primary real estate segment (i.e. new flats), prices will remain stable for the next 6 months,becausethis segment is driven by end-userswho take home loans from banks via cheque (and not cash).

Moreover, price corrections have already taken place in this segment. Property prices in the last 4 years have grown at a lower rate than inflation[1]. So in real terms (i.e. after being adjusted for inflation), properties are already being sold at ~2012 prices – so there’s no scope for further price reductions.

Demonetization has taken back excess liquidity from the market to the banks. More cash in the banking system will enable banks to create more liquidity in sectors of the economy that matter, such as affordable housing, thereby creating a positive domino effect for home buyers in the coming days.

This will lead to several benefits, such as:

ü    Banks will be able to lend more funds to you

ü    The government will improve the infrastructure around you

3.       Increased Liquidity Will Also Boost Prices in the Medium Term

As the housing demand goes up due to (i) increased liquidity (ii) reduced home loan rates and (iii) positive market sentiments, prices will start rising in the medium term, i.e. after 6-18 months. Also as RERA and GST kick in, construction costs will increase to drive up the price of your new flat.

4.       The Post-Demonetization Market Scenario is Ideal for Working Professionals

Demonetization, combined with Real Estate Regulatory Authority (RERA),offers an ideal opportunity to genuine end users, especially young couples and working professionals. On the one hand, cash investors have been driven out of the market;on the other hand, RERA will majorly increase transparency in real estate deals, reduce litigation and boost FDI.

In such a scenario, salaried and self-employed professionals can look forward to investing in anaffordable housing projecton far more favourable terms. 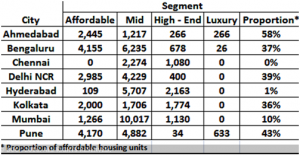 Developers with a successful track record in completing and delivering projects on time will continue to thrive, while over leveraged companies with high debts will most likely run into legal hassles after RERA comes into force.

7. Some Primary Markets Will Stabilize Faster

Some primary markets like Bengaluru are not only beginning to stabilize but are also showing signs of ‘real’ growth (after being adjusted for inflation).That’s because the demand in these markets is driven more by end users and less by investors. Hyderabad is also seeing a resurgence – and so will cities like Kolkata, Delhi NCR and Ahmedabad in the coming days.

If you’re living in a rented flat, 2017 could be a great time to buy a new apartment.And when you do your due diligence, do make sure that your monthly EMI does not exceed your rentby more than 25-30%. Also, look for a location that’s not too far away from your place of work. This will keep your monthly expenses in check. And if you want to upgrade, you always have the option to sell your flat after 5-7 years…anduse the proceeds to buy a nicer flat.

Harsh Modi works as Director at Eden Group, a Kolkata based real estate company. A strong supporter of the Real Estate Regulatory Act, Harsh applauds Prime Minister Narendra Modi’s historic move to clean up corruption and black money. He strongly believes that despite initial difficulties and disruption, demonetization will lead to increased transparency and benefit end users in the long run by enabling the government to invest in infrastructure, build efficient markets and streamline tariffs and taxes.